Cooperation agreement between EUROCONTROL and the SESAR Deployment Manager

The SDA is a unique International Association of leading Airlines, Air Navigation Service Providers and Airports mandated by the European Commission to manage SESAR deployment. EUROCONTROL will support SDA in areas such as project coordination/management, global interoperability, cost effectiveness/cost benefit analyses, performance assessment and the identification of innovative financing mechanisms. The cooperation agreement sets out how this will work in practice, with a particular focus on making sure that duplication of effort and cost is avoided. 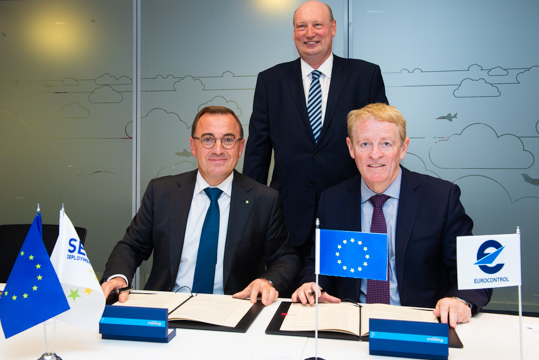 The Director General of DG MOVE, Henrik Hololei, who was present at the signing, declared “This is an excellent example of the European aviation community working closely together for the benefit of Europe. The deployment of SESAR is essential to modernise ATM in Europe and enable the advancement of the Single European Sky. I am very pleased that EUROCONTROL’s experience and expertise will now fully support the vital work of the SESAR Deployment Manager.”

Eamonn Brennan, the Director General of EUROCONTROL, noted “The effective deployment of SESAR is vital for the future performance of the network. I am very pleased that EUROCONTROL is supporting European aviation and the European Union. Our agreement with the SESAR Deployment Manager will help us both to meet the needs of our airspace users.”

Nicolas Warinsko, the General Manager of the SESAR Deployment Alliance, said “This summer has shown how much Europe has a vital need for capacity. SESAR deployment is an essential enabler for capacity. With this agreement, SESAR Deployment Manager and EUROCONTROL join forces towards smoother, faster, performance driven Air Traffic Management modernisation in the EU and beyond.”

The SDM function is performed by the SESAR Deployment Alliance (SDA). The SDA is a “Not-for-Profit” International Association (AISBL) set-up under Belgian Law and composed of leading airlines, airports and air navigation service providers – the managers and users of Europe’s airspace. They are committed to the principle of the Single European Sky and to deploying the technologies that will deliver it to create customer and environmental efficiencies. SDA currently coordinates the implementation of 300 Air Traffic Management modernization projects of which 76 already completed and bringing benefits to the European passenger.