On the first day of the World ATM Congress, the SESAR stand, hosted by SESAR Deployment Manager and SESAR Joint Undertaking, was officially opened by European Commissioner for Transport Violeta Bulc. 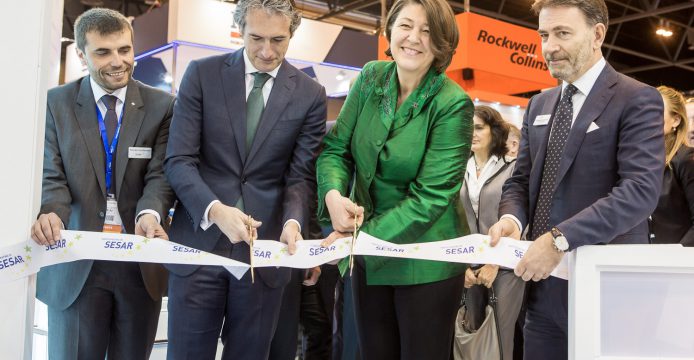 Whether it’s tackling runway safety, passenger security, drone proliferation, a capacity crunch or the broader regulatory, social and commercial issues underlying Europe’s aviation ecosystem, there is one thing for sure… partnerships and cooperation are the way forward. This was the key message by European Commissioner for Transport, Violeta Bulc, who officially opened the SESAR stand and theatre on 7 March.

“SESAR is an essential component of the Single European Sky initiative and a top priority of the Aviation Strategy for Europe,” said the Commissioner, adding how the project has pioneered new ways of working together between industry and institutions. Indeed, results coming out of the SESAR partnership are already prompting uptake by all stakeholders across Europe and worldwide. This is providing better connectivity and mobility, safety and security, a better passenger experience, as well as meeting wider social and environmental expectations to further decarbonise our economy. The development and implementation of the solutions are also generating more jobs and growth for Europe.

The theme of partnership was further addressed at an opening session entitled, ‘Partnering for ATM excellence in global aviation’, where Henrik Hololei, Director General of DG MOVE, delivered a keynote address, noting:  “Today I think that ‘togetherness’ is reflected in our work on the Single European Sky and approach to international cooperation. Sometimes the process of moving forward can be slow and frustrating and it might be tempting to go it alone. But we should remember that while alone we move faster, together we go further.”

The session also featured interventions from Florian Guillermet (SESAR Joint Undertaking), Massimo Garbini (SESAR Deployment Manager), Joe Sultana (Network Manager), Jorge Domecq (European Defence Agency), Luc Tytgat (European Aviation Safety Agency), Christian Schleifer-Heingärtner, EUROCAE. Together they presented tangible examples of how their organisations are working together in SESAR to develop and deploy solutions, giving consideration to the needs of ATM stakeholders and airspace users of all categories, as well as the standardisation and development of the regulatory framework.

Further examples of the power of partnership were given in the sessions that followed on SESAR 2020, global interoperability and the datalink services, as well as during the SES awards ceremony at which several SESAR demonstrations projects were recognised, namely AAL, RISE and Ireland’s Remote Towers.