The European GNSS Agency (GSA) and the SESAR Deployment Manager (SDM) signed a Memorandum of Understanding at the World ATM Congress in Madrid on 13 March on future cooperation to modernise EU Air Traffic Management by leveraging Galileo and EGNOS. 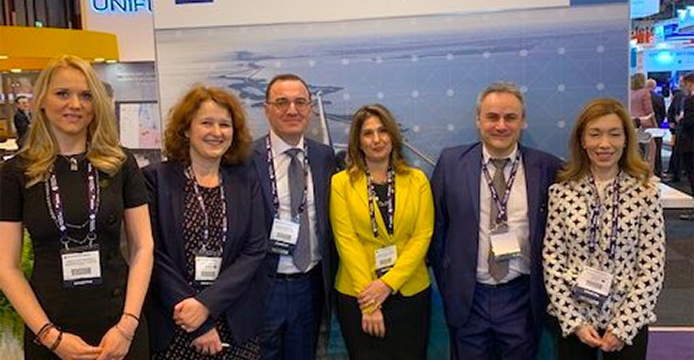 Both EGNOS and Galileo can supportthe modernisation of EU Air Traffic Management, particularlyin the areas ofair navigation and surveillance. SESAR Deployment Manager (SDM) has been tasked by the European Commissionto synchronise and coordinate the deployment of the Pilot Common Project as specified in the SESAR Deployment Programme. Within this programme, Performance Based Navigation and Surveillance, which rely on GNSS, is one of the six ATM functionalities. The MoU signed in Madrid details how GSA and SDM will work together to bring this about.

“This is an important milestone in cooperation between the GSA and SDM and one that will ensure that all aviation stakeholders reap the benefits of Europe’s investment in space.” said GSA Executive Director Carlo des Dorides.

“The GSA is looking forward to cooperating with SDM to reinforce relations with ANSPs and airlines and help them to benefit from EGNOS and Galileo,” confirmed Pascal Claudel, GSA Chief Operating Officer, who signed the MoU on behalf of the GSA.

“I am happy that today at the World ATM Congress, the GNSS Agency (GSA) and the SESAR Deployment Manager signed this cooperation agreement. This new agreement will reinforce the SDM connection with space based technologies for ATM and CNS. Indeed, there is growing proximity between ATM and space, as space based enablers would certainly bring an essential contribution, enabling the most critical Pilot Common Project ATM functionalities as well as CNS modernisation. This agreement materialises the fact that GSA and SDM share common objectives and have mutual interests in successful GNSS and SESAR deployment.” Nicolas Warinsko, General Manager, SESAR Deployment Manager.

The European Commission’s PBN Regulation, published in2018, mandates the implementation of EGNOS approaches atall Europe’s runways by 2024. In suitably equipped aircraft, EGNOS enables aircraft approach procedures that are operationally equivalent to instrument landing system (ILS) ILS Cat-I procedures.The regulation also envisages a full PBN environment by 2030, leading to rationalisation of conventional procedures. For Cat II/III, work is ongoing to make Europe benefit from Ground Based Augmentation System (GBAS) Cat-II/III based on GPS and Galileo dualfrequency. Going further, Europe is also investing in the next version of EGNOS, which will also augment Galileo, and the Advanced RAIM concept, also relying on both GPS and Galileo. 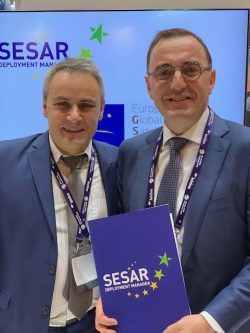 The second area of cooperation between the GSA and SDM deals with Automatic Dependent Surveillance – Broadcast (ADS-B) Out, which is a surveillance technique that relies on aircraft broadcasting their identity, position, and other information derived from on board systems. This signal can then be received for surveillance purposes on the ground.

The current regulation mandates airspace users to be equipped by 2020, including a GNSS receiver. While SBAS is not mandated, it is widely recognised that SBAS can unlock capacity improvements and support enhanced surveillance operations, as well as support the business case when synchronised with navigation.

Airspace users require an integrated and synchronised strategy for navigation and surveillance, to optimise their investments, and theGSA willwork together with SDM to that end.The GSA and SDM will also work together to assistair navigation service providers (ANSPs) and airlines in using EGNOS and Galileo.